The odd thing about Miss Kitty is actually about 10 odd things.

First, was the way I got her. Zach had trotted over the Rainbow Bridge. I was searching for a new horse. I traveled across Alabama to a well known breeder of spotted saddle horses. He had a mare that was the get of his stallion Marshall Dillon. I checked out the mare. She was very nice, but I just did not feel the connect that tells me “this one”.  I wanted a bay pinto, she was sorrel and white. She was smaller than I wanted. Other than that, she was fine. Driving home, I weighed the pros and cons. I had convinced myself to get her. I decided that if I did, I would name her Miss Kitty. I would call the owner when I got home.

I was almost home when I got a phone call from a man named Wayne. A friend had given Wayne my number. I did not know Wayne but he lived 10 minutes from my home and had a mare he had trained and would like to place. She was a spotted walking horse. I decided to give her a try before I decided to purchase the Marshall Dillon’s daughter.

The next day, I pulled in and saw the mare’ rump. She was crossed tied in the barn, and Wayne was brushing her. She was a bay pinto. My interest peaked. She turned her head to look at me when I approached. She had a sky-blue eye. I still remember the lightening bolt that went through me when she turned her head. My very “real first” horse, Pollyanna, who I loved dearly had one blue eye.

I stroked her and watched how she felt about people. She liked being stroked. I decided to give her a turn around Wayne’s place.

I almost passed out. I don’t ask for signs, but it is hard to miss one when you run into it!

“Is she a Marshall Dillon daughter? I asked.

“No. My wife called her that because of the blue eye. She’s a character.”

After 12 years of being owned by Miss Kitty the Blue Eye, I can attest, she is a character. 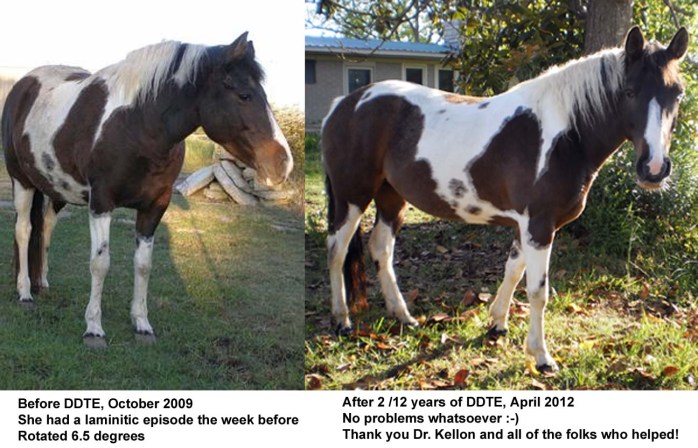 Miss Kitty is an “easy keeper” which is short for she can gain weight on air. I did not know that she showed all the signs of insulin resistance. In 2009, she had a bout with laminitis and founder. My vet, Jacob Cunningham, did the initial save on her life. I thought she was doomed. I researched everything about insulin resistance that I could. There are great websites and groups that can help with this.

The main principles are diet focusing on low carbs and balanced minerals, and exercise. Today  at 16, Kitty has a bit of arthritis, but she is still a happy character.